Fwd: Been Here Before... 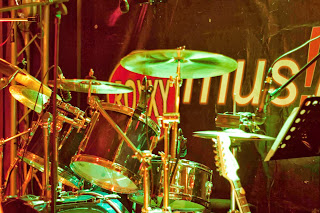 Hungary 7 - Tatabanya Rock Club
by Teri & Bill Drake
This was a SERIOUS case of "Been there, done that, and got a bit more than the T-Shirt"!  Here we are in the Roxxy Rock Club, Tatabanya, Hungary.  Can you believe it?  We are letting our daughter perform in a night club!  At least she's with her dad on stage!  We got this unique opportunity to play in a night club performing all of Bill's songs, without compromise!  Bill and the band rocked the house!  The club was blown away - that Christians could play and sound like that - that it wasn't just "Barbershop Quartet".  Bill was also able to share everything he would normally say about forgiveness, being reconciled, God's love etc.  We scattered our team out in little groups all throughout the nightclub, each with one of our 5 interpreters.  As far as we know so far, no one came to Christ, but at our debrief meeting coming home on the bus, we heard numerous exciting stories of many seeds being planted and watered.  Here are some of them:
One of us had a conversation with a self-professed Atheist who pulled out a psychology book saying, "This is my Bible".  He believes all the answers for life and existence are found in human psychology and science.  One of our skilled evangelists was able to very gently point out that all the things this guy was mentioning were actually things that God created - such as love, intelligence, science, and creation.  This got the man thinking about some things, especially the foolishness of many aspects of human wisdom, and the faith that ALL creation stories necessitate - whether faith in God, naturalism, spontaneous generation, etc.  Biologically speaking, simply adding "time" into the equation on a macro level doesn't do anything exempt give more opportunity for erosion and corruption.
Jeremy, one of our 17 year olds who was raised in Hungary, got to talk to a guy named Chico after the concert.  Chico was angry and stubborn.  He had 18 Bibles at home, and had tried different religions, catholic, protestant, etc..  Due to the loud music in the club, they had to get close body-wise and it seemed to actually be disarming, as they would talk into each others ears! The guy told Jeremy that he was stupid for believing in God.  Jeremy showed him some scriptures from the book of John and Chico looked like he was taking it in, and actually started smiling, nodding as if he was inderstanding and receiving it.  When they parted, they actually hugged, Jeremy prayed, and gave him the scriptures to look up in one of his 18 Bibles and Chico's heart softened. Through the course of the conversation he went from being hard, angry and stubborn to being soft and accepting.  Awesome.
Kitti, a young Hungarian on tour with us, shared with a guy about the difference between religion and relationship with God.  He had recovered from cancer.  He said he couldn't believe in God.  When they told him it was God who helped him recover from cancer he stopped, thought about it and it seemed to dawn on him that it really could be so.  People are so quick to blame God for the bad things that happen to them but never the good things.  His lady-friend who was with him wasn't so receptive.  She said she wanted to go to hell because her friends would be there.  A seed was planted however, because when they parted ways he was given a gospel portion, and he seemed to genuinely say he would read it and honestly think about it.
The Missions Pastor from Chino Valley spoke with a man who used to go into Hungary and kill Serbs who were ethnically cleansing Hungarians.  The conversation got real interesting when the man said he was religious.  Bill played out the cycle of retribution versus reconciliation for him, and he was genuinely confronted with the depths and depravity of sin, it's generational impact, and it's seeming impenetrable facade across cultural divides.  This gave him an opportunity to introduce this man to the Price of Peace, the inefficacy of religion, and the heart-change that comes from a relationship with Jesus.
And so it went - on, and on.  Bringing light into a dark place.  We arrived to a serenade of Guns & Roses blaring through the nightclub speakers and video monitors, but when we left, the employees shook our hands, nodded to us, and it was obvious that not only had this been a very different night - we had gained their respect, but we had also most definitely brought a very different Spirit.