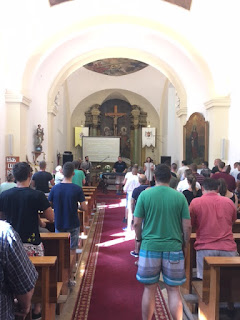 The Bill Drake Band has toured in many countries all over the world, and as such, we have been in a variety of circumstances – on a ship in Turkey, in a prison in the UK, playing on truck trailers in Azerbaijan, and setting up the drums on table tops in Serbia!  But rarely have we had the opportunity to do a concert in a Roman Catholic Church, and even be allowed to carefully move some of the more “valued” items on the platform, such as a statue of the Mother of Jesus, or a solid stone lectern used for the Scripture Readings.

But the little Catholic Church in Rackeresztur (pronounced: ‘rats-care-est-tour’ whilst rolling all the “R’s”!) Hungary, not only allowed us to do so, but welcomed us with open arms to bring the message of the Gospel of Jesus Christ to the men of the local drug rehab center and their extended families.

We arrived at the rehab center for lunch, and were treated to a great Hungarian meal.  Marcel, one of our translators, noticed a young man looking extremely dejected, as he was apparently being enrolled in the drug rehab center.  Hovering nearby, his mother was extremely distraught, while his father, obviously distancing himself from what was an embarrassing and disappointing situation, was trying to stay detached.  The mother was trying to get her son to go to his father, but neither man was willing to bridge the gaping chasm that was separating them.

Later, after setting up, respectfully moving certain religious paraphernalia, and sound-checking in the difficult space, we started the concert to a hall nearly filled to capacity.  After the first three songs, I usually share my testimony, and this time was no different, emphasizing the part where my dying mother prayed for me even though I cursed Jesus in her face.  I shared how I rejected God after her funeral, and went out and trashed my life.

As I was sharing, many in the room began to tear up, and some began to weep.  That particular testimony ends with me sharing how Jesus Christ saved my life, and how I hope my mother can see her prayers have been answered.  I close with dedicating my next song, There’s a Place of Immeasurable Blessing, to all the mothers in the room who pray for their children, regardless of where they might be at with God in the moment.  It was obvious to all of us that the story and song had a deep impact on the audience.

At our next tour Devotions, my daughter Sharayah humbly shared that she had had a vision during that part of the concert.  She said through great emotion, that as we sang the lyrics,

…it appeared to her as if the painted ceiling of the church opened toward the back of the sanctuary, and angels began descending into the church, and began processing up the aisle.  They were carrying torches, and bringing light into the areas and hearts in the room that were dark.  As the song finished, repeating the same opening lyrics, Sharayah felt as if God were impressing on her, “These messengers of mine are inhabiting My presence.”

Others in our Devotional time recalled that many responded to the Lord at the end as we impressed upon them the message of reconciliation from 2 Corinthians 5:17-21:

17 Therefore, if anyone is in Christ, he is a new creation. The old has passed away; behold, the new has come. 18 All this is from God, who through Christ reconciled us to himself and gave us the ministry of reconciliation; 19 that is, in Christ God was reconciling the world to himself, not counting their trespasses against them, and entrusting to us the message of reconciliation. 20 Therefore, we are ambassadors for Christ, God making his appeal through us. We implore you on behalf of Christ, be reconciled to God. 21 For our sake he made him to be sin who knew no sin, so that in him we might become the righteousness of God.

Marcel then shared the epilogue to his story:  During the invitation time to the concert, he noticed that the father of the troubled son had moved next to him in the pew, and had his arm around him.  Praise God for the ministry of reconciliation. 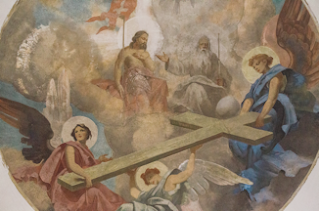