The Arms of Jesus 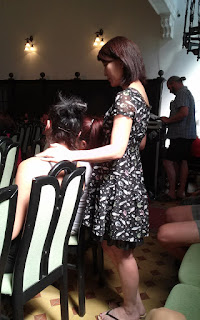 This was the second time we have presented a Bill Drake Band Concert at this facility. Both events felt dark, lonely and heartbreaking and we prayed hard for God to reach out to them thru Bill Drake's ministry in music and words.

Just before the inmates arrived, a leader of the prison told us we could have some limited contact with the women, but no photo's were to be taken of their faces. After the concert was over, the women would immediately be taken out of the concert area. We also had restrictions as to the area we could walk around the campus. He also told us to sit in the back row and the next row in front of us would be where the more hardened women would be required to sit. One mother-killer was also going to be in that row!

After that row filled up, and all the other inmates were still waiting to come in, the women began to ask about the 8 year old Chinese boy who was with us, and what his name might be. "Sarah's son, Casson" we answered. When they all turned around to look at Casson, he began to hand Salvation Bracelets to each of these woman in the last row, bracelets with the colors: Black, Red, White, Blue, Green and Gold.  One woman happened to speak English and listened as we explained what each color represented for a person who trusts Jesus Christ for Salvation.  She promised that she would share what the colors meant with the inmates.

Bill Drake's testimony is used tremendously among any Prison Ministry and our team was praying for the Holy Spirit to speak softly to the hearts of these young women.

Sure enough, one of the young women directly in front of Sarah Liu (dancer, media person and evangelism team member from CVCC), began to weep; softly at first, then harder and harder. Sarah has a mother's sensitivity, and felt the need to offer a tissue, then a soft voice, more tissues and then hugs, not to just one, but three, one on each side of the original woman had also broke down and was weeping.

Sarah recalls, "When I used my whole arm to hold the original girl, that girl started to kiss my arm many times and that caused me to tear up immediately. Then when as I wiped the tears off her face, the girl kissed my face, as I leaned into her.  Nearby, another girl didn't cry, but always was staring at me. I felt she was so hungry for love, so I held that girl also, as my heart was being broken for what was happening to them. I wish I had more arms to hold all the girls who were crying at that moment!"

Sarah softly asked them, "Did Bill's testimony about his mother touch you? " to the first

woman to cry. She said yes, then Sarah asked the second the same question, and she too said yes! Then Sarah asked the third and the terse response was, "NO! I don't have a Mother!" Sarah and others think she had just found the mother-killer…

Sarah made sure that every woman in that row had a "Hungarian Gospel Tract" in their hands as they were led away. How thrilling for us to have the privilege to pray for each of these women as they passed by us and back to their confinement areas. They were short prayers, but we know God heard every one of them. (Psalms 116)

Only God knows for sure how many girls came to Christ that day, and if the "Mother-Killer" will come to repentance and reconciliation. We are praying for that to happen!