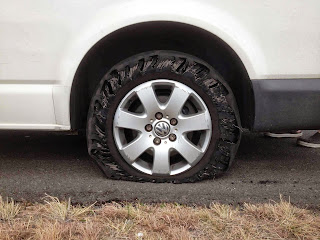 South Africa 3 - The Karoo Bummer. Somewhere between Capetown and Bloemfontein we got a flat.  If this wasn't nowhere, we could see it from there!  (found out later it was near Richmond, a concrete loading dock in the middle of nowhere where a train stops once in a blue moon!) This is one of the many parts of touring that are quite unglamorous - right up there with keyboards breaking, and 3:00am wake up calls! Harry and I got it fixed, while Helena and Benjamin (their 9 year old son) waited by the fence in the brush. It's in a part of South Africa called the Karoo - WIDE open spaces man.  Wow. Then we found out later from our sound equipment provider, Rocco, that there were an inordinate amount of flats on that section of motorway, and the local authorities believe it might be the work of a local tire company in need of some extra business. Hmm. But the first item of importance in a world full of "bad things that happen", is: how will you respond?  Freak-Out?  Get cynical?  Become despondent?  In fact, if you think about it, it's the ONLY thing we can control - how we respond. Truth be told, this is probably one of the best definitions of worship I think I've ever heard - "a proper response to God".  Of course then comes a million definitions of "proper", but suffice to say, Micah 6:8 is a good place to start! I guess a final thought would be how God Himself responded to a fallen world.  John 3:16, Romans 5:6-8, and Philippians 2:5-8 give us a good idea... Harry and Helena responded great, took it in stride, and we were on our way.