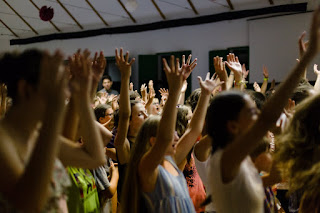 Words don't begin to explain what just happened here!  Revival hit the camp! It was a Baptist Youth Camp - the organizers were a Pastor and his wife, Lotsi and Gabriella.  She had had a dream/vision the night before we got there, that the Holy Spirit fell on the camp and left the ground shaking... They were SO expectant for our ministry when we arrived, and this was the reason why - they truly believed God was going to move!

During Devotions that afternoon with the team, I felt led to read Isaiah 61:1-4 over us as a team:

"The Spirit of the Lord God is upon us, because the Lord has anointed us to bring good news to the poor; he has sent us to bind up the brokenhearted, to proclaim liberty to the captives, and the opening of the prison to those who are bound"

I had no idea how those verses were going to be played out in real time right before our eyes!  Pastor Lotsi gave us total freedom, believing that God had brought us there for such a time as this... but he asked us to please give an invitation at the end for Salvation and Rededication.

The Concert started with a bang!  The first songs went extremely well, audience was focussed and responding.  But then a BIG insect came in and brought a distraction, RIGHT when I came to the punch line of the key testimony.  But we powered through it, rebuked the enemy for distracting us, and did a serious commitment song (I'll Obey And Serve You) and they clapped, stood and sang with!

Then came the direct invitation - MANY put up hands, and then came forward for prayer. Many were saved (including the hardest, most difficult kid in the camp), many rededicated their lives to Christ - it was like a spiritual grenade went off during "Let It Rain, Open The Floodgates of Heaven" - God seemed to literally open the floodgates of heaven.  Kids were standing four and five deep to get to a councilor, and some were on their knees weeping and repenting before they even got to the front.

When the invitation time was over, we did another praise song, and it brought more Spiritual Explosion!  Our Dancelink team went first, and pulled people onto the front, and then suddenly everyone broke loose, and it wouldn't stop!  They called for us to play God's Great Dance Floor, and a spontaneous "dance-off" started!

Just when we were running out of songs, their worship band came up, and elicited more dynamite!  The meeting just didn't want to stop!  Their worship band did three songs total, and by this time then entire camp was dancing, including our bus driver.  They ended with We Exalt Thee in Hungarian- we all ended up on our knees, tears, praise, repentance - off the chain. More prayer groups spontaneously developed outside, on the ground, on the dirt roads, more singing and dancing erupted around the campfire, etc!!!  Revival.