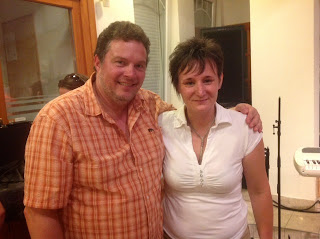 This concert was done in a beautiful, modern Baptist church.  They had just finished holding a week of English Language Camp, where they had another team of Americans there teaching younger Hungarians how to speak English.

When Attila, the leader of OM Hungary approached them about out tour, they had at first informed him that there was already another band there to close out the week of camp with a concert.  But then the leader of that band, Dona, found out that it was Bill.  Dona immediately went to work to try to get us there, even sacrificing his own time on stage so we could get out the message of Broken & Complete to the youth there.  Dona is a "class act" for sure.
The original idea was that Dona and his band would open for Bill's band.  Problem was, we arrived just a tad late due to unforeseen circumstances, and by the time we got set up and sound-checked, there was no time to return all the setting for Dona's group.  We found out about 3 minutes before the starting that we would now be going first with our 1.5 hour concert, and Dona's band would close out with worship!
The hall was packed with expectant youth, and their parents.  The concert itself was extremely well received, and the Pastor sat in the front pew and just beamed the entire time.  He was enjoying it so much, Bill and his band just kept looking at him to get encouragement and inspiration!  When it was over, he got up and just blessed us, and then heaped more blessing.  He said the concert was a perfect finish to the week, and thanked God for sending us as a special gift to their week.  We certainly didn't deserve all that accolade, but his heart shone through.
After the concert, a woman we'll call Anna (pictured with Bill), came up to Bill and told him that she "went first" with her father after hearing Bill in concert at another church in town last year!  Bill vividly remembered her coming forward, distraught,  crying and wanting to repent about not talking to her dad for many years, but not knowing how to start. They had a totally broken relationship due to some past abuses. Now their relationship is loving and reconciled after she took Bill's challenge to "Go First" with him, and ask him to forgive her for any part in the brokenness she needed to own, including any hard feelings, unforgiveness, bitterness, etc.
This night, Bill shared the similar message and she was in the room!  Anna came up to Bill again, asking if Bill recognized her.  Bill said "Yes, of course!  We prayed for over 20 minutes, helping you to get to a place of some healing, so you could begin the forgiveness process with your father, and get set free from all kinds of bondages."  She related how things have been healed with her father - they actually have a relationship again, and she thanked us over and over again, retelling the story and saying now she is convicted to go to a work collegue because there are problems with that relationship that needs reconciliation.
It's so rewarding hearing of the fruits of last years labor!  What a huge blessing God gave us this night, actually getting to see the results of seeds sown and prayers prayed, even it is was one year later!