The God of the Broken 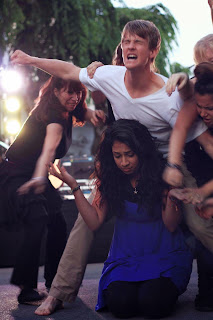 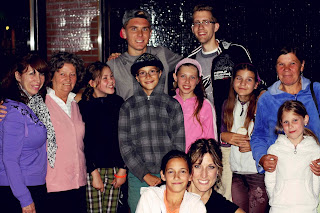 The church here had been praying for this outreach for months.  So the ground was prepared for us which was a huge deal!  The response below as you will agree bears that out!  The concert was in an outdoor venue in a pedestrianized city street.  We set out chairs for people to sit outside a coffee/bar type place where the public could buy drinks and sit.  People were walking buy, some stood and listened for awhile, while others moved on and still others would stop, then eventually sit and listen.  It was an unbelievable night, with so many unbelievers hearing, staying, letting us know that they loved it, and conversing with us after the concert, we couldn't report it all here!  But suffice to say, here are some of the stories:

Last year this Pentecostal Church that was hosting our concert put on an outdoor outreach on the same street that we were doing our concert.  A younger couple came up to the pastor and expressed their anger about it and said they shouldn't be doing this. They pastor then employed the verse that says, "A soft answer turns away wrath" and they went away a bit more nice (!).  And now a year later they had "stumbled" upon this outdoor concert that we were putting on.  Their son had been riding his bike along the street area, had stopped, and wanted to listen to the concert.  They stayed the entire time.  After the concert the couple came up to Bill and through Bence's translation said how much they enjoyed the concert.  All the while the Hungarian pastor was marveling at the change of attitude they had from last year when they were giving him grief for holding the outdoor evangelistic outreach. They had a beautiful Hungarian style painted souvenir egg, and they gave it to Bill as a gift for coming!  They said they could tell we were real and not phony - they sincerely appreciated our authenticity.  Bill made it clear that this all came from God.

As the conversation continued in Hungarian, they expressed to Bence that they were scared about having to go to church.  He told them to read John, the gospel of Jesus.  That night on the way back to our accommodation, we prayed for them as a team, and asked God to do a deep work.

The the next day the Pastor called our Hungarian leader, Attila, and said that this couple had just called him on the phone and said their son had Diabetes and liver problems and that we wasnt expected to live a long life. This was why they had been so hostile to God.  But having heard Bill's Broken & Complete Concert, They said they wanted to get together and learn more about this God of the Broken, this God Who makes beauty from ashes, This God of reconciliation and love.  Would He heal their son?  Could He give them the grace for whatever lies ahead?  The Pastor promised to meet with them and walk them through this whatever may come.

After the concert a group of about six  7-10 year olds grouped around and wanted to talk to Michelle, our Dancelink leader.  This group of children were from the church that hosted the concert. She explained that God created them to do certain things. She asked if they had dreams for their life, asked if they wanted to pray and ask God to show them the dreams he had for them, given that God had bigger dreams for them.  would they be willing to surrender their entire lives to Him? They all were excited and really came alive after they prayed.  Mary, our other woman leader, gave each one a bracelet to remind them of their prayer and commitment.  Each bracelet said something different, such as "When in doubt pray", "Jesus loves you", "pray always".  In the prayer they gave their hearts to The Lord.  The countenance on their faces was totally changed..

Michelle and another young woman we'll call Eda got to talking as she had waited for Michelle to specifically talk to her.  She told a story of being abused at 5 years old, and had leukemia and other health issues with no cure. She said she thought it was a spiritual issue somehow.  So Michelle led her in an time of prayer after asking some questions.  If it was a spiritual issue, Michelle  wanted to get to the root of the issue. So they asked the Holy Spirit to show them.  Eda sensed the Lord show her that she was steeped in guilt.  As they prayed, Eda felt Jesus said to her to trust Him completely, Totally Abandoned (like Bill's song!).  She wanted to tell Jesus that she gave her life to Him right there!  She had forgiven her brother, but Michelle asked if she could bless her brother.  She said it would be hard but she will do it.  When she prayed that prayer, she said, "I bless you with clean thoughts and purity and to give your life to him".  There was much more, but when they were done, with tears of joy streaming down her face, she said her heart was light and burdened lifted.

Tamas, the sound guy who had been traveling with us for a week and has heard this concert about 5 times by now, is not a believer.  He had conversations with about 4 of us from the team that night.  He couldn't understand why we need God, such as in Michelle's case.  Attila told him that God helps change us so then we are better able to do our part.  Bill, not knowing this, but knowing that Tamas had been critical of Michelle's testimony, went to Tomas after the concert, and gently said "Hey Tamas, do you expect that if you get a punctured tire it will then patch itself and reinflate itself?"  Tamas said "No, I throw the tire away and get a new one".  Bill then said, "Should we then throw away Michelle and get a new woman in her place?" Thats not how God works, he doesn't just throw people away if they are broken or unusable.  He helps them get fixed so they can then carry on their way functioning as He made them to."  Tamas said he had not thought of it that way. and said he would like to think about it.  Bill is not going to let it go, and with Attila, they will continue to witness to Tamas for the rest of the tour.

Pray for Tamas - he needs prayer for his sight.