And The Truth Shall Set You Free 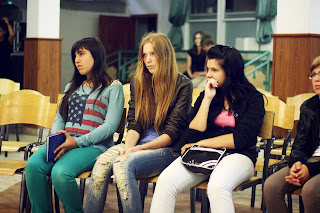 It was our first concert of the tour, we spent all day continuing to
rehearse, and then the venue changed from being outdoors in the city
center, to being at our accommodation place - a Reformed School, and
we were to play in the cafeteria!

We need to move from doing the "Broken and Complete" concert outside,
to inside due to very windy and cold weather. For our devotional time
we got into our prayer partner groups and just walked around the
grounds of the school praying for the concert and the people who will
be coming. It was a good exercise in getting ready for the concert
spiritually.

This was the first concert where 30% of the audience came to The Lord
for the first time! I must add, however, that there were only 10
people in the audience but it's still a great percentage nevertheless!

Here is the story of how it happened:

After the concert Calvin, one of the the teenage boys from Chino
Valley Community Church and the Grandson of the Church's Missions
Pastor, went up to three girls, ages 14 and 15, as he had sensed
something was going on with them during the event. He gave them some
tracts and he asked them to open it and through translation (The
tract was in Hungarian of course) asked them if they could answer the
main question, which was, "if you died tonight, do you know if you
would go to heaven?" None of the girls said they knew..

Then Calvin asked if they wanted to know the answer and they said
"yes"! So he told them they can't do anything to get there because
according to God, the best we can do is as filthy rags. Calvin went
to say that we are all sinners and we all fall short of the glory of
God because none of us are perfect with Him. But God has made
provision in His Son Jesus, and the way we can get to God and heaven
is by accepting His free gift of eternal life. Therefore, as sinners,
if we accept we are sinners and accept God's gift of His Son, who died
for our sins and raised from the dead, we will be saved.

Two of the girls started to tear up - they had been yearning for the
answer during the entire concert, and appeared relieved that they had
finally found that answer. Calvin asked if they wanted to accept the
free gift. They wholeheartedly and enthusiastically said "Egan!"
(Yes, in Hungarian) So Calvin led them through a prayer of surrender
to the Lord Jesus, and all three surrendered their lives to Jesus, and
asked Him to please take up residence in their hearts.

Then he asked the question again and they answered that yes they will
go to heaven. They all had a group hug and he told them we would pray
for them and they exchanged emails so they can stay in touch. They
had gone to a church that seemed to be teaching that salvation was all
about works, so they were relieved to learn it was a free gift,
because they had never felt like they could measure up.

Their Christian friend who brought them was so happy to know her
friends will now have eternal life! She then turned around and
dedicated her life to mission! She was so blown away that God could
use her like this to help bring her friends to Christ, and now wants
to invest her life in doing this as a full-time career using Drama and
the Arts to spread the Gospel!

What an incredible night! Praise God!