There is no such thing as Coincidence! 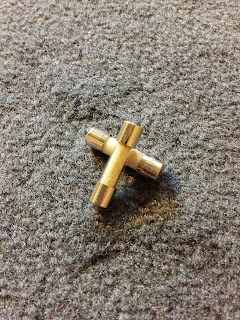 Mosbach III - May 14th, 2013
The guys made their way from the Stuttgart airport to the OM Germany base in Mosbach no problem, Joe being upgraded from the little Ford Focus to a larger, more spacious Mercedes Station Wagon, that could accommodate their guitars and pedal boards.

We arrived from Hofen in time for lunch, and had a great reunion - the size of our touring team just went up by a third!  We walked into Mosbach to have some team time, and Ty, Katja and myself found ourselves in a very cool space - a church that in the times of the Reformation literally split the sanctuary, putting the Reformers in the entrance half, and the Catholics in the Altar half!
Remembering a similar looking space in Hungary, I asked the female warden at the door, if it was OK if the three of us sang a worship song in the church.  She lit up, and in German said, "Please!"  So up we went, and you can see the result here:  <https://www.facebook.com/photo.php?v=10200760039990809&set=vb.1456752264&type=2&theater>
Later that afternoon, we took the opportunity to rehearse, and upon plugging in his pedal board, Tim remembered too late that he forgot to flip the switch inside his pedal board power supply from the US 110 volts, to the European 240volts. the result was a second of power, and then a nicely toasted fuse!
I asked Tim to hand it to me, and I went out the door to the OM Germany garage, where I knew Walter would be at work.  He took one look at it, and then the clock, and headed straight up the driveway, yelling behind that he hoped the electrical shop down the street would be open, since Werner, the man who did electrics at OM was gone for the day.
Right as Walter hit the top of the driveway of his garage, who should come by on his bicycle, but Werner!  Walter flagged him down, showed him the fuse, Werner took the fuse, and motioned for me to follow him!  This led me back to OM Germany, and to Werner's workshop, where he summarily pulled out the EXACT fuse that Tim needed to be his Bass working again!  No, we don't believe in coincidence around here - this was a "God Thing" no doubt!!!