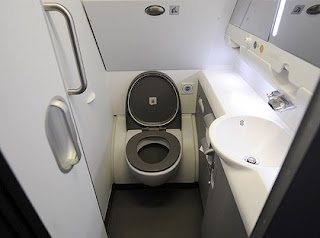 There is a myth out there that many subscribe to. It is the myth that
International Travel is glamorous. There are some times that this is
true, when people of means are able to purchase a level of service
that rivals the privileges afforded to ancient kings - full flat beds
in First Class, being waited on hand and foot (literally on some Asian
Airlines in First Class), and meals that are prepared by gourmet
chefs. And then there is what I call "Reality Class", that arena of
service that is granted to those who can barely get on the plane - by
standby, or by cheap fares. The following journal entry is a
description of one such journey - one I actually took a few days ago,
that I thought might shed some humorous and real light on what this
can really be like:

"I have just arrived in Amsterdam - flew all day yesterday from
Bangkok, Thailand, through Moscow, to Amsterdam.  It literally
involved walking blocks from the hotel with luggage, sweating heartily
from the 99% humidity in the tropical air, taking a sky train, then
switching to a airport train, standing in lines for TWO HOURS at the
Bangkok airport, almost missing my long-haul flight to Russia, being
literally squeezed into the very last seat on the plane, which was at
the very back (!) But I am sure what would have been absolutely
HILARIOUS would have been the bird's eye video of my changing my
shorts into long pants in the Areoflot Airlines A330-300 at 36,000
ft.!

You see, I had worn shorts and t-shirt on the journey to the trains,
etc., cause I knew I would be hustling out in the tropical air, and I
knew I would turn into puddles of sweat if I had worn long pants and
long-sleeved shirt - so I brought the change of clothes so I could
change on the plane once I cooled down.  Well, trying changing pants
in a space the size of a small microwave, where you don't want to put
your feet on the floor without shoes cause an inebriated Russian kinda
"missed" if you know what I mean!  So I'm standing on my shoes after I
have taken them off, and trying to pull of my shorts and put on long
pants, half leaning against the folding door, and half standing on the
vacuum toilet, in the middle of violent turbulence!  It's a wonder the
stewardesses didn't send in the KGB on me, as I was banging my elbows
and knees on every vertical surface in there!!!

Then after landing, I experienced a CRAZY Moscow Airport, where you
needed to be Sherlock Holmes to discover where the Transit Desk was,
and therefore another tight connection (plane was boarding when I got
to the gate!), landing in a very NICE Amsterdam Airport, but then to
figure out the bus system!  I had to go in and out of the Airport to
the Bus Depot 3 times!!!  The wonderful Dutch lady at the info desk
kept giving me the wrong platform information, and I could just see me
standing in the cold missing my bus, or on my way to some destination
that I couldn't pronounce!!!  Finally got on the right one, and asked
the Driver to alert me to my stop.  He was very gracious after I told
him I was an ignoramus from America where we have no knowledge of what
public transport is!!! I really don't know the last time I had a more
crazy 36 hours!"