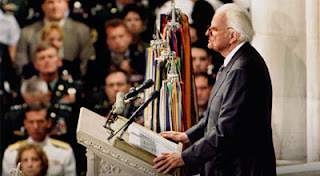 I got this from a dear friend, Andrew Scott - who comes from Northern Ireland, a area of the world that was ripped and torn by sectarian violence for more than 400 years.  His insights here into the United States of America are so prophetic, and insightful, I couldn't pass up the opportunity to copy this to my Blog.  Please read this, and ask God what to do.  - Bill
With all the coverage of the events commemorating the terrible happenings on 9/11 something became painfully obvious to me.

Before I share what it was I will admit to being one of "them there foreigners" and so my view is from the perspective of one who has only lived here 9 years but who has always loved the USA. I guess I am a little unique - many Americans claim Irish roots while I am an Irish man who has American roots - my mother's parents met and married in New York and all her siblings were born here.

What became evident to me (I would believe many others also) is the stark contrast between the US in the days after 9/11 in 2001 and now 10 years later.

10 years ago we had a Christian statesman Billy Graham give a message outlining our need, as a nation, of God. He said, "we desperately need spiritual renewal....my prayer is that we will feel the loving arms of God wrapped around us." We had scripture reading and prayer in the name of Jesus. Our president said that these events "lead us to pray....prayers that yield our will to a will greater than ours.....may He always guide our country." Today the same event was held excluding evangelicals and certainly was a far cry from the messages we heard 10 years ago. It was more of a muddle of syncretism and political correctness.

10 years ago the solution in 2001 was to turn to God and today it seems to be "if we can come together." Difficult for God to wrap His arms around a people who distance themselves from Him. In regards to the New York service Mayor Bloomberg stated, "what religion would we chose anyway?" A strange question for a leader in country which states in their pledge, "under God," a God who the founding fathers had no doubt as to His identity.

10 years ago this country was united in an unprecedented way - Americans stood shoulder to shoulder hand in hand. I remember visiting 6 months afterwards and still every house, every yard had at least one flag flying. Today this country is as divided as it has been in decades.

10 years ago people flocked to churches with a new understanding of their deep need of the Judeo Christian God and a desire to feel his comforting touch. Church attendance immediately increased by 25% that Sunday. The following week, half of American adults attended a church somewhere. Today many churches are far below pre-9/11 numbers. Surveys show us that there seems to be more acceptance of other ways and sources of peace and God has been downgraded to one among many.

10 years ago our president called out on our behalf to Almighty God and challenged us to do the same. Today our president deems national prayer unconstitutional.

We have come a long way......in the wrong direction.

God gives us a simple solution.

If we would humble ourselves, pray, and turn from our wicked ways He would heal our land. Could it be that the pain that we are feeling as a nation today is somehow linked to our unwillingness to do these three things. 9/11/2001 humbled us and caused us to pray like never before. I fear that we we have not simply become passive in this regard but have taken clear steps to move in the opposite direction of doing these things.

May God have mercy on us and turn the hearts of this nation once again to Him.
May we personally learn the lesson of how easy it is for us as individuals to also slip and forget some of the foundational principles of our faith.