In The Blink of an Eye 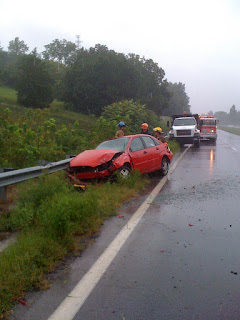 Teri and I were returning to Atlanta last week after saying "goodbye" to our youngest, Sharayah at a University up North.  Driving southbound on US Highway 29, just outside of Gretna, Virginia,  we encountered a pretty steady rain, and drove on cautiously.

I noticed a truck coming up fast on my left in the fast lane, and I was struggling to see through the thick spray he was putting up as he went past - when I saw it - a red car, eerily turning end over end in our lane - as if in slow motion - twisting straight for us through the mist!

Both the truck and I braked hard, and veered to the right to pull over as the red car flipped it's fourth and final time and came crashing down on the guard rail.  It had been coming from the other direction (northbound), hydroplaned, lost control and veered right across the grassy median, launched into the air in a twisting motion as it hit the hard edge of the southbound lane.

The driver of the truck immediately got out  and raced to the red car - I put on my hazards to warn the traffic that was coming up behind me, and then drove cautiously around the truck to see if I could help.  The truck driver had helped a young woman out of the car, and she was kneeling in the hard rain on the asphalt as the trucker (he turned out to be an extremely capable EMT) held her there while he finished with his 911 call.

I opened up the side door of our van, and asked him if it was OK for him to let the frightened girl into our van and out of the rain.  He was glad to, and then proceeded to check her for any broken bones, and any other trauma.  It turned out that her airbags and seat belt probably saved her life - the car was totaled, and yet there wasn't a scratch on her.  The trucker said it was a miracle she wasn't hurt, and told the girl that "the good Lord was surely looking out for you today."  Teri consoled her, and we ended up praying with her after the trucker left to liaise with the Highway Patrol and the Ambulance.

It was sobering to discover that this young girl was also on her way up to start College, and she was only a year older than Sharayah.  It was a bit unnerving to see played out before our eyes just how fast things can go wrong.  But it was a huge blessing to be able to be there for someone in a time of crisis, to console, help her dry off, put a warm blanket over, and pray for her well-being and thank God for His protection - and thereby truly be reminded that God has His eye on our daughter as well, and therefore know that we can trust that He will provide the angels and/or people to be there in her moment of need when we can't be.