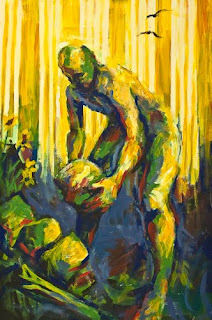 Pass through, pass through the gates!
Prepare the way for the people.
Build up, build up the highway!
Remove the stones.
Raise a banner for the nations.

- Isaiah 62:10
The artist sat listening to the message, but could sit no longer.  Compelled by the truth of the Scripture, and moved by the image that was bursting forth on his imagination, he positioned the blank canvas, took up the laden brush, and began to illuminate that which had been unseen.
And as the imagination became incarnate, the tapestry of ideas unfolding on the canvas, the Scriptural hope began to take shape - the work is enjoined, the rubble confronted, the path restored; all the while the "blueprint" of the future left shimmering just behind the current task, awaiting final fulfillment.
And the enemy, also hovering, lurking, waiting for an opportunity to "steal" the word of truth from the artisan - but he will not be dissuaded.
Is was sheer joy to watch this painting come to life at our SALT conference this July in Rome, Italy.  There was much that came to light, as Arts Champions from all over Europe came together for a training, an envisioning, a sharpening, an empowering, and a validating experience that we in OM will feel the impact of for some time to come.
A story is told of an inquirer who visited a stone quarry, in order to plumb the hearts and minds of the workers there.  He asked one man, "What are you doing here"?  The man responded, "What does it look like?  I am hewing rocks out of this quarry."  The same question was put to a second, and he replied, "I am earning an honest day's wage."  A third worker was engaged with the same question, and he gave a response that revealed a panoramic understanding of what was really going on.  "What are you doing here?" came the question.  "I am building a cathedral!" came the reply, pregnant with hope, vision, and personal ownership.
And of such is the Kingdom of God.

Email ThisBlogThis!Share to TwitterShare to FacebookShare to Pinterest
Labels: Arts and the church