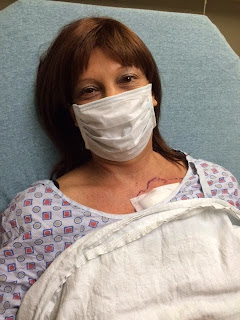 "Bill, I think I am developing a fever…"
These are not the words you want to hear from someone who is 'immuno-compromised' because chemotherapy has mostly taken out their immune system.  This is also not something you want to hear from the person on earth whom you love the most, and in that moment, are almost exactly on the other side of the planet.
I was in Thailand for OM's International Leaders Meetings, and Teri was coming home from Washington DC with Shelby.  About an hour outside of Atlanta, Teri felt it coming on, and it was not good.
A few weeks before, Teri's port had flipped (this is the surgically installed device in her upper left chest that delivers the chemo directly into a main vein deep inside her), and they were unable to get the 4th Chemo treatment into her that way.  They had gone for a vein in her arm, and could't find a good one, and while they 'poked and hoped', Teri had passed out, and they had to call 911 because she wasn't coming to… I can't tell you how unpleasant it had been to hear that - when I was in Mexico at a YUGO meeting.  Why is it that the only two times I have travelled away from her during this entire ordeal, is when the enemy decides to pounce?  We all know the answer.
Minor surgery put the port right, but during that surgery somehow, an infection began, which was now manifesting itself as she and Shelby approached Atlanta.  After phone calls, pills, inspection, etc., the port was removed in an emergency procedure while I was still in Thailand, and it was determined it had become septic.  Then started home health-care with IV drip antibiotics, and I arrived home on Friday late evening, just in time to learn how to administer this new treatment to my wife.
But we weren't done the drama yet.
Over the weekend, things got worse.  The wound (where they took out the port) began to get more red and swollen, and her fever never went back to normal.  We called early on Monday, saw the wound doctor, and were referred to the Infection Disease Doctor for Tuesday.  She saw Teri, and in less than 5 minutes, scooted up to her very close, put her hand on Teri's shoulder, and gently and firmly said, "You have Septicemia, and I am admitting you to the hospital immediately."
I have only seen Teri cry twice during the entire journey.  Once, when she was told she had cancer, and now.  I just held her.  The Doctor made the arrangements, and sent her office manager with us into the Emergency Room, where we had to be admitted, cause the hospital was totally full.  So was the ER.  It looked like a triage zone!  2.5 hours later, Teri was given a gurney to lie on in a corridor.  Another hour later, she was given a tiny, tiny room, still in the ER.  And they were taking blood, more blood, and flushing her blood with antibiotics.  And we were crying out to God - from beginning to end.  And He was with us.
He was with us in the ER waiting room when a woman who didn't even know us came up to us, said she would put us on her prayer chain, and eventually gave Teri a gift bag with some hand lotion, some chocolate, and a beautiful cross.  We eventually put that cross on top of the TV in her eventual destination, her own hospital room, but she didn't get there until 30 hours later.  But that cross ended up being SUCH a blessing, as is became a conversation starter for most everyone who came into Teri's room.
In fact, on the second morning Teri was in the hospital, I called her before I came to visit, and asked her, "Baby, what can I bring for you?" expecting some personal items or comforts from home.  Instead she said, "I need at least 10 of your Broken and Complete CDs to pass out to all the people I have been sharing and witnessing to!"  Why am I not surprised???
All in all, Teri was in the hospital from Tuesday early afternoon, until Saturday late afternoon.  They were not going to release her until her fever went away, and there was no more staphylococcus bacteria in her bloodstream, AND her white blood cell count was up.  Praise God that all came together on Saturday morning.  We came home to a house decorated by our daughters Shelby and Sharayah, and it was awesome.  I even helped by baking a cake the night before (first cake I ever baked in my life!!!)
And what have we learned?  Oh my - I can't put it all here.  But let me leave you with this one thought that seemed to dominate our prayers and thoughts, and I am still considering this in light of God's sovereignty and authority:  To be accepting of God's will and leading, but then not accepting of what the enemy has in store for us once we are there, is a skill in timing and discernment that all who would be abiders and fighters must learn to navigate well.
Psalm 145 tells us He trains our hands to war.  Psalm 23 says He leads us by still waters.  Philippians 4:6&7 delivers a promise of peace that will protect us like the Praetorian Guard.  And we are to take every thought captive unto the obedience of Christ.  How to be at peace and at war at the same time?
More on that in my next post.  But thank you for your prayers, love, concern, and encouragement.  There was NO DOUBT during the ordeal last Tuesday onward of the presence of the Lord, and the prayers of His people.  That is the only reason we are still standing, and we are eternally grateful.  God Bless