"We Only Die Once, So It Might As Well Be For Jesus" 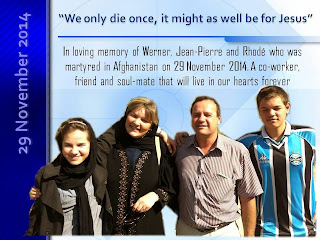 While in Asia recently, Teri and I had the opportunity to meet the coolest family, the Groenewalds, who had given up their careers in South Africa in order to help the people of Afghanistan.  Bill had a few great conversations about music with their son, JP, and gave him a couple of his CDs, including "Aroma, the fragrance of Costly Worship", the CD that has "Wear The Crown" on it.  Then just over a month after we met them, fellowshipped with them, and worshipped with them, came this news and story.  I want to share this with you, as it is so powerful.

29 NOVEMBER 2014:  Werner Groenewald and his two children martyred in Afghanistan

This morning (Sunday 30 November 2014) our hearts are broken.  We have lost a dear friend, a faithful worker and a precious soul-mate.  Werner Groenewald and his two beautiful children, Jean-Pierre and Rhodé, were killed in a Taliban attack in Kabul on Saturday 29 November 2014.  Hannelie, his wife, was not at home during the time and survived the attacked but lost everything.

Three gunmen and suicide bombers stormed the compound where Werner and his family lived in Kabul on Saturday, exchanging fire with security forces before leaving Werner and his two children dead.  Six other hostages were rescued after the afternoon attack while one Afghan worker also died in the attack

The bloodshed began around 4 p.m. local time, when a grenade was lobbed at the gate of the compound, after which the militants stormed the building. The men were carrying machine guns, grenades and wearing suicide vests.  A Taliban spokesman said in a statement that it was targeting "a secret Christian missionary and foreign invaders' intelligence center."

This report is not an attempt to explain another theology of martyrdom.  It is simply an expression of grief and anguish and an appeal for the wider body of Christ to share in the pain of the Groenewald family, especially Hannelie and Werner's parents.

How do we express our deepest empathy and condolences with the family members who now have to face the reality of losing a son, a brother, a husband and two children in one horrific incident of terror?  What words or theology can relieve the pain?

Like Jesus at, the grave of Lazarus, we can only weep.  Words are insufficient but tears can be offered on their behalf before a loving Father who understands the acts of violence against a beloved Son.  Yes, we celebrate the life of three martyrs who loved Christ more than they loved life but we mourn the death of three dear servants, friends and co-workers.

Our last time of fellowship together was a month ago in Asia when we contemplated the joy set before us of serving Christ.  In Werner's last message to the international group of co-workers he spoke on "Counting the cost of following Jesus".  His words will remain in our hearts forever as he closed the session with these words:  "We only die once, so it might as well be for Jesus."

We had invited Bill Drake to lead the worship, and we listened to him sing the song "Wear The Crown" and the words rang in our hearts "It is your time to wear the crown". We did not know that soon it would be their time.   Together we worshiped, we laughed and we cried.  Together we knew that the call to carry our crosses and deny ourselves is not a theology but a reality.  Today we know that Werner, Jean-Pierre and Rhodé are wearing the coveted crowns set apart for an elect few.

May we appeal to you to set some time apart in your service today to pray for Hannelie and the family.  Weep before God as you share in the pain of a loving wife and mother who lost everything and an extended family who lost a son, brother and grand children.

We also pray that their death would not be in vain.  May the blood of the martyr truly be the seed of the Church and ignite something in the hearts of believers across the globe, especially in South Africa, to follow Christ unconditionally, whole-heartedly and faithfully.  May we be inspired to be Kingdom-minded and pursue the redemptive purposes that Werner's s family so faithfully pursued in Afghanistan.  May our live be a testimony of Christ, and our deaths ultimately point to His glory

We honour these three heroes of faith who have given their lives for those who hated them.  We celebrate the invisible victory that can only be seen by those who understand the cross.

(this article was written by our dear friends at www.incontextministries.com)