The Gift on the Bonfire 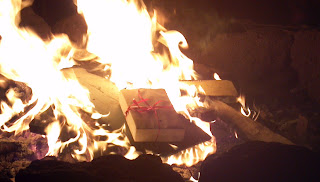 A young woman we'll call Aubrey came on a Mission trip last summer to Latin American country.  She was a hard worker, and fit well within the overall mission team.  I got to know her, and at first was totally unaware of the torment that was going on in her life.  However, during a team meeting, things starting coming out, including the horrific molestation that she had gone through as a child, victim to one of her own relatives.  This had left a trail of wreckage through her family, and through her years, leaving her struggling with huge self-esteem issues, and problems with deception and trust.  Many of us prayed for her, and a number of us continued to stay in touch with her as she went home, went back to University, and continued to wrestle with things that were intended by the enemy of our souls to destroy her.

But Aubrey continued to "lean in", taking thoughts captive under the obedience of Christ, renouncing the enemy, rebuking the spirit of fear, and asking the Lord by His Holy Spirit to give her love, boldness, and a sound mind.  She battled through the draining wasteland of low self-esteem and would pray, read the Lord's word, and confide in a few trusted councilors who were walking this road with her.

I met up with her again this summer, and was so blessed to see that the Mission had accepted her back, especially after some of the difficult things that had happened last summer.  She was once again working hard as an appreciated member of the ministry team.  We sat on top of an overlook, and she recounted to me her journey so far.  I was so impressed at the ground she had gained, and asked her how things were looking right now.  She replied, "Bill, I have been having a recurring dream.  In that dream, I am standing there as a little girl, with a wrapped present in my hands, standing at the foot of the cross.  Jesus is on that cross.  And He is asking my to give Him my present.  But I can't.  He gently keeps asking, and I try, but I just can't do it.  What could this mean?"

I cried out to God in my heart, "Help me interpret this.  I really want to help Aubrey, Lord.  What does this mean?"  And immediately the dream made sense to me - the gift was her identity, a false identity, wrapped up as a present to make it look better, but inside, it held all the horror of being a victim of molestation, a prisoner of the vicious things that had been done to her, wearing the grave clothes of low self-esteem and the badge of worthlessness.  And Jesus was asking her to let Him have it at the cross, give it to Him for He died for all of that, and allow Him to exchange it for what His death was providing:  freedom, resurrection, victory, restoration.

I explained this to Aubrey, and she totally understood it, probably knew it before I said it, and yet admitted that still, she couldn't do it.  She even said, "I have been living with this for so long, that it is a part of my identity.  If I lay it down, I'm not sure I really know who I will be anymore."  I left her on the Field, not with foreboding, but rather, a slight lack of peace - would Aubrey step up and do what Jesus was asking her to do - lay down this false-self, this victim who felt worthless, tainted, and discarded?  Would she allow Jesus to give her a new identity in Him, where all are given the power to be more than conquers, to be the Bride of Christ, and where nothing can separate us from His love?

A few weeks ago I got the answer I was praying for, as Aubrey sent me a photo from one of her last nights on the field.  In the photo was a gift, wrapped with ribbon, and laid on a bonfire.  She obviously had taken that final step, laid down the grave clothes, and allowed Jesus to be the One who defines her, where in Him she finds her true identity.  Praise God.

Is there something in your life that haunts you?  Is there a land-mine that the enemy has laid in the soil of your years, in the thoughts and memories of your life?  Have you been robbed of the joy of your true identity, being given experiences that strive to define you in terms that are untrue, debilitating, and ultimately destructive?  Aubrey's story is the story of the woman at the well, the woman caught in adultery, actually all of our stories - ravaged by sin, and left for dead.  But the Lover of our Souls has a different agenda.  He is the creator of all things new, and that most certainly includes a new identity in Christ, and identity that is defined by Him and Him alone.